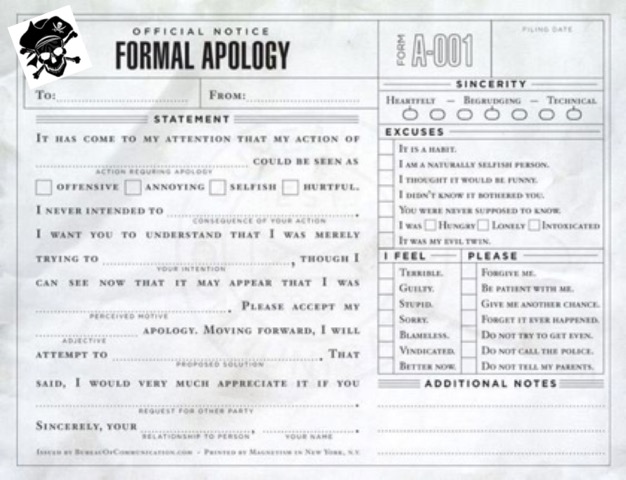 None of us needs a lesson in ‘how to screw up’. We’re all very talented and productive in that area – at least I know I am. But, seriously, how many times have you ached to know what to say and what to do when it was clean up the screw-up time?

We’re not talking about accidentally bumping into someone, telling a little white lie or being three minutes late for a meeting. We’re talking about the screw-ups that result in majorly hurt feelings, big lies, more lies (or more and bigger lies), physical damage and broken promises. This conversation is about the things we’ve done – that we shouldn’t have done – and then covered up with lies and deception. The ‘act’ was bad enough, lying about it exacerbated it 100 times over!

I can’t recall any personal major transgressions or big lies I’ve told in the last decade or so, but that may have something to do with the double standard we all have about lying. When you lie it’s a big deal. When I lie it’s for a good reason and purpose… Give me a second; I’ll think harder.

Well, okay, there was that time I backed into a neighbor’s car in the parking lot of my apartment building, pretended it wasn’t me and didn’t leave a note on his windshield. But, ten minutes later this guilt-ridden car-crasher drove back, rang his bell and told him what I’d done. So I guess that doesn’t count.

Once I threw a big party and purposely didn’t invite a couple that should have been invited. When they mentioned the ‘slight’ a few weeks later, I lied. Flat out lied. Without thinking it through, I told them that I had sent an evite (in fact, a reminder, too), and never heard back from them. They probably knew I was lying (I told you I’m not very good at it.) and haven’t called me since…

Oh, and there was that time that I broke a date with someone (for what seemed like a better offer) and got caught in the lie. Guess that counts, he was pretty upset with me. We set up a coffee date to talk about what happened – a safe, neutral venue. There was no question about who screwed up. It was I (doesn’t ‘me’ sound better here even if it’s incorrect???). I broke a promise, told a lie and disrespected a really nice, totally innocent guy.  He was hurt and I was ashamed. Regardless of the outcome, I knew I had to clean up my mess.

We both felt much better by the time the check was paid. You’ve heard me say how much I love a good process and the clean up process I used was very effective. I call it the Pirate Process because only a scalawag would need to use it (after sabotaging, pillaging, plundering and/or high-jacking the respect and feelings of their first mate or crew). The Pirate Process depends on the use of the three ‘Arghs’ (Regret, Responsibility and Remedy) to adequately swab the deck and clean up a screw up. I was in full Pirate mode when I sat down with him and it worked. We are still friends and chat now and then, but by my choice (and mutual agreement) we’re no longer dating.

Acknowledging and expressing regret for what you’ve done, taking FULL responsibility for it and then offering to take some kind of action to remedy the situation, works pretty much every time. You may not have intended to hurt, but you can intend to make amends.  Aye –aye, matey!