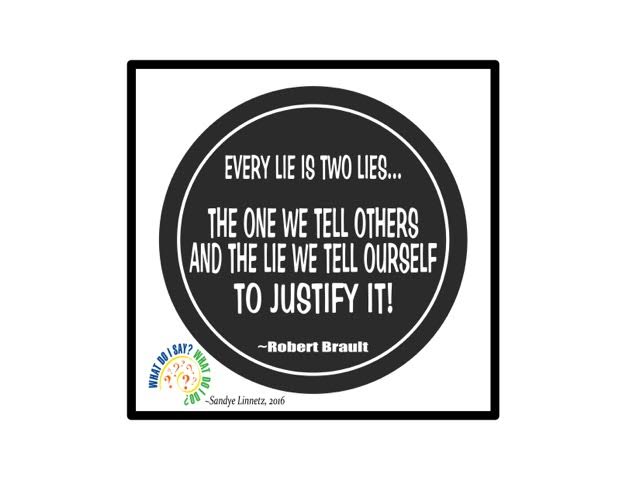 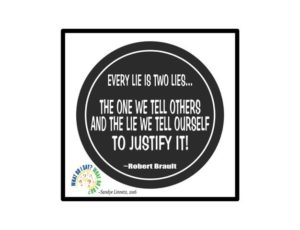 Years ago (many years ago) I went into business with a girlfriend. She was a force of nature – like a landslide. She was big, brash, blunt and – dare I say it? – ballsy! I thought those things would be assets in a business partner. Well, at least I did… until she became my business partner. Turned out she and I had very different ethics and values when it came to running a business.

She lied to one of our vendors about a problem they had caused for us. Yes, they screwed up, that was true. But we figured out how to work around the problem and all it cost us was a little extra legwork and aggravation. She, however, told the apologetic vendor that they had cost us a $1000 job and she expected them to cover it. They agreed.

When she told me what she’d done I was mortified – and I told her so. And that was when her justification process kicked in.  For the next few hours we ‘discussed’ the situation. I said it was wrong, unethical and a lie. She justified what she did by explaining that they screwed up and should pay for their mistake. They were a ‘big’ company and they could afford it. We could use an extra thousand dollars to fix up the store and put some of their money toward a new delivery vehicle. If we’d had a good delivery vehicle their screw-up wouldn’t have been so bad. We deserved a new one. She was teaching them a valuable lesson and I should be able to see that. Besides, she told me, they owed us for all the upset and running around we had to do because of them. It would make their company better in the long run. She knew what she was doing and it was the right thing to do.

Her defense of what she did – the explaining and justifying – didn’t alter any circumstances or my opinion about the morality of what she had done. All it did was have me shake my head in wonder at her ability to find reasons for everything she did. She had actually convinced herself that, once again, she was 100% right. In her mind she was justified.

FYI, I called the owner of the ‘offending’ company and told him that, after discussing it, we decided that all they owed us was a refund for the materials that didn’t get delivered. He was thrilled…  and I no longer had a partner/friend.

In the years since that defining episode, I’ve met other justification junkies. You know the type. No matter what they do or say (especially if the morality of it was in doubt), they were ready, willing and able to share their ‘good reasons’ for having done it or said ‘it’. I’m referring primarily to the ‘unethical’ choices that people make. The problem is, justifying those choices makes it easier the next time a tough choice has to be made. We get better and better at justifying the more we do it. These justification junkies have justified themselves and their actions so much for so long that they are totally convinced that anything they do is right and necessary. You can almost smell the overwhelming toxicity spewing forth from their self-defense.

I know we all justify our words and deeds to some extent, and we all love to be right, but when someone steps that far outside the moral boundaries of ethical human behavior – and is able to feel ‘right’ and good about it… I say it’s time to cull the herd.