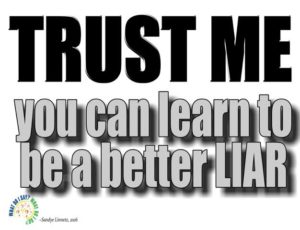 This is not about a blog about the ethical or moral status of lying. It’s about teaching you to be better at doing it. It occurred to me that since we all lie… pretty consistently – even if for a wide variety of different ‘reasons’, we would all benefit from gaining a little expertise in that area. So, after combing the internet for ‘tips’ (since I’m not all that good at lying, myself) here’s what I’ve learned:

Don’t lie unless it’s going to get you something you really want. One could argue that sometimes a lie has merit; to protect a reputation, to prevent hurt to someone else, to win at poker, to ease tension, and so on, but it will always depend on the context and extent of the lie, as well as the legality/morality of what is being lied about. So, don’t try this at home, unless you have already dealt with your internal moral and ethical hurdles.

Speak generally – offer as few details as possible (unless you are absolutely positive you can remember them all). Say: Traffic was bad. Do NOT say: You should have seen the traffic, tons of cars backed up, I was standing still for at least 20 minutes, and then when we did start moving, we moved at a crawl for the next five miles… Say as little as possible.

When possible, make up a good story in advance and practice telling it. Writing out the lie can help to enhance your memory of it and to come up with a logical sequence of events to share.

Anticipate and rehearse your answers to their possible questions. Practice telling your lie using appropriate facial expressions (like holding back tears) and use the ‘real’ smile’ we talked about a few weeks ago.

Sprinkle in some partial, misleading truths – it’s hard to catch you in a lie if it isn’t a ‘whole’ lie.

Make eye contact and keep it… along with a neutral, relaxed posture.

Know your target – tell them what they want to hear.

Never change your story… in fact, bring it up again from time to time to reinforce it.

If you get caught, never tell the truth. Admit no wrongdoing!!! Make up another lie or tell a half-truth that isn’t quite as bad as the original lie and would have obviously forced you to make up that original lie. (You had no choice, did you?) If you can, decrease your responsibility and soften the impact of your lie by bargaining about your responsibility in the matter. (Who else can you blame?) The goals here are distraction from the real truth and keeping yourself out of trouble.

Blame the outcome as the cause: I dropped my stupid phone and it didn’t work so I couldn’t call – I was too upset – l and now I have to buy a whole new phone!

Add a small confession to your lie to reduce suspicion: I know I said I wouldn’t, but I foolishly called my ex just as I was getting ready to start on that work for you.  He really upset me and couldn’t do anything after that.

Combine your lie with the truth: Everyone was drinking at the party and when they offered me a drink I said “no” at first, but they insisted, so I decided to have just one small one. And that’s all it took. One little drink and I was totally drunk! What a lightweight, huh?

OR, HERE’S AN IDEA… IF ALL OF THIS SEEMS SMARMY OR LIKE TOO MUCH TO LEARN AND REMEMBER… JUST TELL THE TRUTH!!!