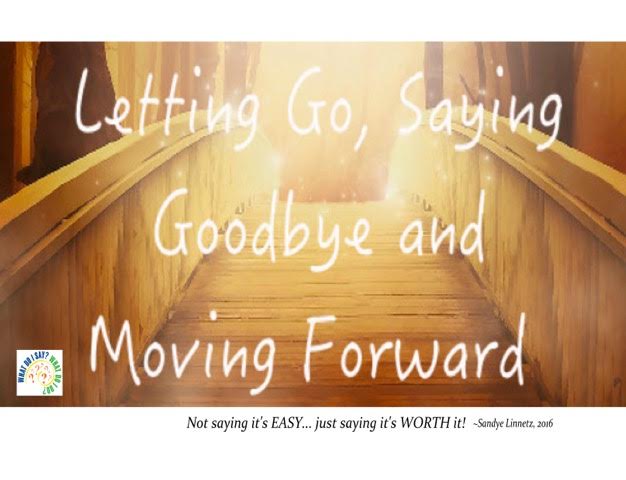 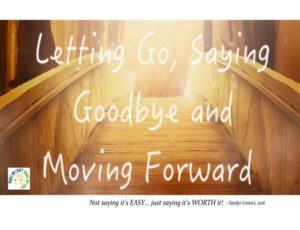 Over the years, I have become a master of letting go and saying good-bye. I’ve done it with a wide variety of loved ones, possessions, places, projects and events; even books, movies and ‘things’.

Here’s what I’ve found: Even after I’ve made the initial decision to let go – a process in and of itself – the final ‘good bye’ – especially when its necessity is a result of something sudden or shocking – can be quite challenging. I take the challenge because I need closure. Closure is vital for me… probably for you, too. And that final good bye… that’s one powerful way to get it.

Knowing that I’m going to get a whole lot more of whatever it is that I resist has me consciously working to accept the way it is – however it is. I don’t have to love it; I just have to get it. When we fight the changes, resist the way it is and ignore the need to let go… BAM! We’re stuck with it forever. Yes, it’s another one of those muscles to work out, but so worth the effort!

There have been times when I’ve had to release and rerelease (sometimes multiple times) before I’ve truly let go and am ready for my final good bye. I’ve found that rituals and ceremonies help – even if they are short and informal. Turns out it’s not weird at all, ceremonies and rituals are more human and far more ubiquitous than you can imagine.

In fact, recent research suggests that rituals may be more rational than they appear. I love ‘em! Even the simplest of rituals can be extremely effective tools in the letting go process. Rituals performed after experiencing losses – from loved ones to lotteries – actually alleviate grief, and rituals performed before taking on high-pressure tasks – like speaking in public – can actually reduce anxiety and increase confidence. What’s more, rituals appear to benefit even people who claim not to believe that rituals work. True story, check ‘em out…

When Morgan, my terrier, was about to be ‘put down’ I held her lovingly in my arms but I didn’t cry. It was only weeks later – when the carpet she’d destroyed was being replaced – that I broke down and cried like a baby. “Take the stupid carpet back”, I screamed, “I just want Morgan back!” My ‘good bye’ took the form of my screaming that she meant far more to me than carpeting ever could!

The Watts riots ended and we celebrated (a bit apprehensively) with prayers. It was over, that was good – but we lost so much. Praying together felt good.

The World Series was over and the Cubs finally won!!! After the shock came the joy and celebration – we toasted our good fortune.

I hadn’t smoked for over three years before my ‘just one – just this once’ became a habit renewed with a vengeance. Then, seven years from the day I first quit (easy to remember ‘cuz it was on my birthday), I decided to say good-bye to cigarettes for good. I took what was left of my last pack, tied it up with a pretty pink bow, and presented it to my two adult children as my gift to them. Together we created an impromptu farewell ceremony; breaking each remaining cigarette and throwing them into the trash. Bye bye…

When my father died, we all helped to bury him. It helped that I had had months before his death to ‘be’ with him and then hours in the hospital to hear that he loved me and to say my good byes. But it was throwing the shovels of dirt on his coffin that made it all so real so final and so complete.

Mark was killed in Viet Nam. His body was never found. I never got to say good-bye.

Whenever my ‘ex’ and I threw a party – which we frequently did – there was always the traditional ‘post party assessment and appraisal’. When the last guest left and lights were out, we reviewed the evening – who was there and how it went. It was our way of saying, “the party’s over it’s time to call it a day”.

As I packed up the last of my personal belongings and carried them to the car, I looked around at the parking space that was no longer really ‘mine’. The moving van had left almost 30 minutes before and, though I knew I could still beat them to my beautiful new home in the desert, I did want to get a move on!  I wasn’t prepared for the rush of emotion as I took one last look around the place I’d called ‘home’ for the past 5 years. Moving to the center of the empty room I ‘thanked the space’ and took a few moments to remember… I whispered, “good bye townhouse formerly known as mine” and Sandye left the building

The movie ended. I clapped, picked up my purse and sweater and headed for the door.

We have endings all the time. Happy endings, sad endings, sudden endings, inevitable endings, endings that offer us relief and some that send us into a tailspin of stress, shock and upset… and, in every instance, we have rituals for saying good bye.

My good-bye rituals always include an actual “good bye”.  I like to use my words…

And now, because this is the last of the Motivate and Activate blogs (at least for a while):

I close my eyes and remember some favorite ‘call moments’. And then I say aloud:

This blog’s for you. I love you. Good-bye for now…