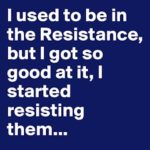 When I recently declared that I was on a journey to ‘understand and conquer’ my resistance in life, I had no idea that I’d be ‘traveling’ with such a huge tribe! It turns out that resistance is a big deal – especially in the world of psychology – and no one among us is untouched by it. Who knew?

Now, half dozen books and 20 or 30 articles later, I realize that resistance is not only normal; it’s a basic survival defense mechanism. I don’t do what I don’t do because somewhere deep inside me (i.e., subconsciously) I’m afraid that if I did do whatever it is, it would actually hurt me. So I protect me. Thank you, Me.

We resist in order to protect ourselves… from DANGER, PAIN, DISAPPOINTMENT, DISILLUSIONMENT and hundreds of other equally awful things. Here’s the rub: that place ‘deep inside’ – the place where fear is hangin’ out – may not have our current best interests at heart! What we feared in the past may not be an issue anymore. Personally, I’m over that whole ‘thing’ I had in 6th grade about girls who had waists smaller than their hips and thighs that didn’t rub together being ho- bags! I’m pretty sure that I could lose weight, look phenomenal and still be a ‘nice girl’. Adult me has moved on…

I’m ready to ‘join the resistance’ against resistance! Who’s in? Great! But I do want to issue a few warnings… This is an inner game. It’s a mind game and the battlefield of Resistance vs. Action is almost entirely within us. Unfortunately, because often we’re not very good at recognizing resistance for what it is… and not too hot at combating it, we have a tendency to resort to stepping up our external game to win the war. Instead of using our inner strengths; motivation, our ability to think and reason, gratitude and appreciation, we work on our external tools (As if that would make any difference.)

Silly us, we think we can beat resistance by organizing our desk, writing down our tasks, designing new and better systems (tweaking them until they’re nearly perfect), buying a better elliptical machine and so on. So we have a better mousetrap and we still can’t catch a mouse! It’s not that those things don’t matter, it’s that they don’t matter in the ‘war against resistance’.

Admittedly my battle plan is still a work in progress, but so far I’m seeing some very positive results. I can’t be ‘ambushed’ because I am now aware (step one) that I’m being attacked on at least three ‘fronts’: the gym, online dating and self-promotion. Those are my big three and I now recognize resistance when it shows up.

I’m standing up to the fears I can now identify and I’m not backing down! I structure my day to include confronting and coming to terms with my fears. I’m shifting from victim to hero in my very own story!

“On the field of the Self stand a knowing and a dragon. You are the knight. Resistance is the dragon.”
— Steven Pressfield