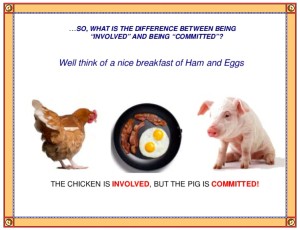 When I have what I consider to be a really good idea – I mean a really good idea, I create a plan and jump into action. Sometimes this results in ‘a really good idea that didn’t quite work out to be what I envisioned’. My short foray into the world of Yardles (surprise decorating of front yards for all occasions) is still high on my list of really clever ideas that never made it big.  Other times the results have been simply off the charts. When I was barely thirty I created a business writing gag lines on latex balloons; decorating with them and delivering them in bouquets. An article featuring ME in Time Magazine and guest appearances on crazy numbers of radio and TV shows attest to the success of that idea. It supported my family for over 30 years!

So what, I’ve asked myself, what made one idea fail and the other blossom into an internationally known 7-figure company? Same creator, generally appealing to the same audience…  what was different? Me, I realized. It was me and my attitude toward the project. When people didn’t immediately rush to order a Yardle, I questioned the feasibility of my idea. When one was ordered that had to be done between 4 am and 5 am, the job was turned down. Yardles was a ‘good idea’. Balloon Affair was a commitment.

This gal does not offer up the words “I’m committed” flippantly. When I do commit to anything (a project, person, idea, task or bacon ‘n eggs breakfast) you can count on me – like death, taxes and Trump’s comb-over. I will do it. I will make it happen. NO MATTER WHAT.

No Reasons – Just Results! That’s how the balloon biz grew. I believed in it and I worked it. There was simply no quitting… even when people laughed at the idea of building a business with rubber balloons… even when ‘head’quarters was in my girlfriend’s guest bathroom… even when I carelessly opened the trunk of my car and lost 100 balloons to the wild blue yonder! Stuff happens, right? And when you are committed you just keep moving forward. NO MATTER WHAT.

Commitment meant working every holiday from dawn to exhaustion… because I said so. Commitment meant sticking with it when I was the only worker who didn’t get paid that week.

Commitment meant cutting myself off from any possibility outside of achieving my results.

Commitment meant EXPECTING it to all work – knowing down deep inside that I would not -could not fail. I was 100% dedicated to my company… ask my children who almost never saw their mom on weekends unless they were with her being ‘ballonatics’!

It seems silly to say 100% dedicated. Saying that you can be anything but 100% committed is like saying you’re just a ‘little’ pregnant… Either you are, or you’re not – all in or all out.